Lyn Gardner
15 November 2021  ·  Follow on Stagedoor
“Transferred from Sheffield to the West End, Max Webster’s acclaimed production is getting audiences roaring. Lolita Chakrabarti’s adaptation of the novel about an Indian boy who is cast adrift on the Pacific for 227 days, sharing his lifeboat with a Bengal tiger, has been acclaimed as being better than the film and the original book and comes with clever projections and puppetry. Sheffield Theatre is very much on a roll at the moment and the suggestion that this family friendly show could be the next War Horse is unlikely to be an exaggeration.”

The hit play Life of Pi is inspired by Yann Martel's blockbuster 2001 novel of the same name. Its story is simple but utterly enthralling. After a cargo ship sinks in the middle of the vast Pacific Ocean, there are five survivors stranded on a lifeboat - a hyena, a zebra, an orangutan, a Royal Bengal tiger, and a sixteen year-old boy named Pi.

Life of Pi the novel was a spectacularly successful work of fiction. It was winner of the Man Booker Prize, selling over fifteen million copies worldwide. This smash-hit adaptation brings its story of adventure and hope to a brand new audience in the heart of London's West End.

This stage adaptation of Life of Pi boasts a book by Lolita Chakrabarti, the playwright who won a WhatsOnStage Award for Best New Play in 2020, and also penned hits Hymn and Red Velvet. It's directed by Max Webster, who has been at the helm of popular Old Vic shows Fanny and Alexander and The Lorax. And it features memorably good puppets by Finn Caldwell, who created the famous title character in long-running hit War Horse.

Critics have been enchanted by this fantastical animal fable. The Evening Standard's ★★★★ review wrote that Life of Pi is "dazzling. That’s the word for this stage adaptation of Yann Martel’s bestseller". Meanwhile, The Independent's ★★★★ review praised designer Tim Hatley's "sublime set, which seems to unfold perpetually as layers, each more stunning than the last".

Life of Pi is on at Wyndham's Theatre in the heart of the West End. Don't let the chance to buy tickets sail away from you: this show is a memorable delight that'll leave you dreaming of storm-tossed oceans, long after you leave the theatre.

Just five survivors of a shipwreck are on a lifeboat, adrift in the middle of the Pacific Ocean, one is a sixteen year old boy. The problem is that the others are a zebra, a hyena, an orangutan and a Bengal tiger who is getting hungry. Tickets are available now until the 30 October 2022 for this epic, life and death drama. Described by Time Out London as “One of the most stunning theatre shows I have ever seen.” The Observer says "Everything about this production is amazing" .The Life of Pi is winner of ‘Best New Play’ in the WhatsOnStage / UK Theatre Awards, plus a stunning five Olivier awards, including ‘best new play’, ‘best actor’ and ‘best set design’. This is London theatre at its finest.

Life of Pi is at the Wyndham's Theatre London. Based on the award-winning novel by Yann Martel, and adapted into an Oscar-winning film by Ang Lee, the Life of Pi tells the story of Pi, the young son of a Pondicherry zookeeper, waking in a hospital bed after being shipwrecking and claiming that he survived on a lifeboat with a selection of the animals, including one fierce tiger. Not only a tale of bravery and endurance, the Life of Pi is a production that brings emotions to the stage with a cast of vivid characters and sublime puppeteering. It’s drama in its purest form told through brilliant visuals, a heart-wrenching scrip and sets and special effects that will suck you in.

The Life of Pi is directed by Max Webster and the playwright is Lolita Chakrabarti adapting the original Yann Martel novel. Puppetry and Movement Director is Finn Caldwell and Set and Costume Designer is Tim Hatley.

Life of Pi tickets are Up for Grabs Now!

Life of Pi is a modern-day fairy-tale without the fluff, carrying you along on a wave of emotions and spectacle. You’ll be gripping your seat rooting for Pi. Get your Life of Pi London tickets for the London theatre season’s most memorable production.

This animal fable is a puppetry-fuelled wonder

Everything we’ve been missing

Thought-provoking adaptation that is much better than the book itself

A theatrical testament to creative brilliance

Dream-like fable makes for a dazzling night of theatre

The technical wizardry alone is worth the ticket price

The animals are the stars in this puppet-powered show

Great puppets, but what happened to the story? 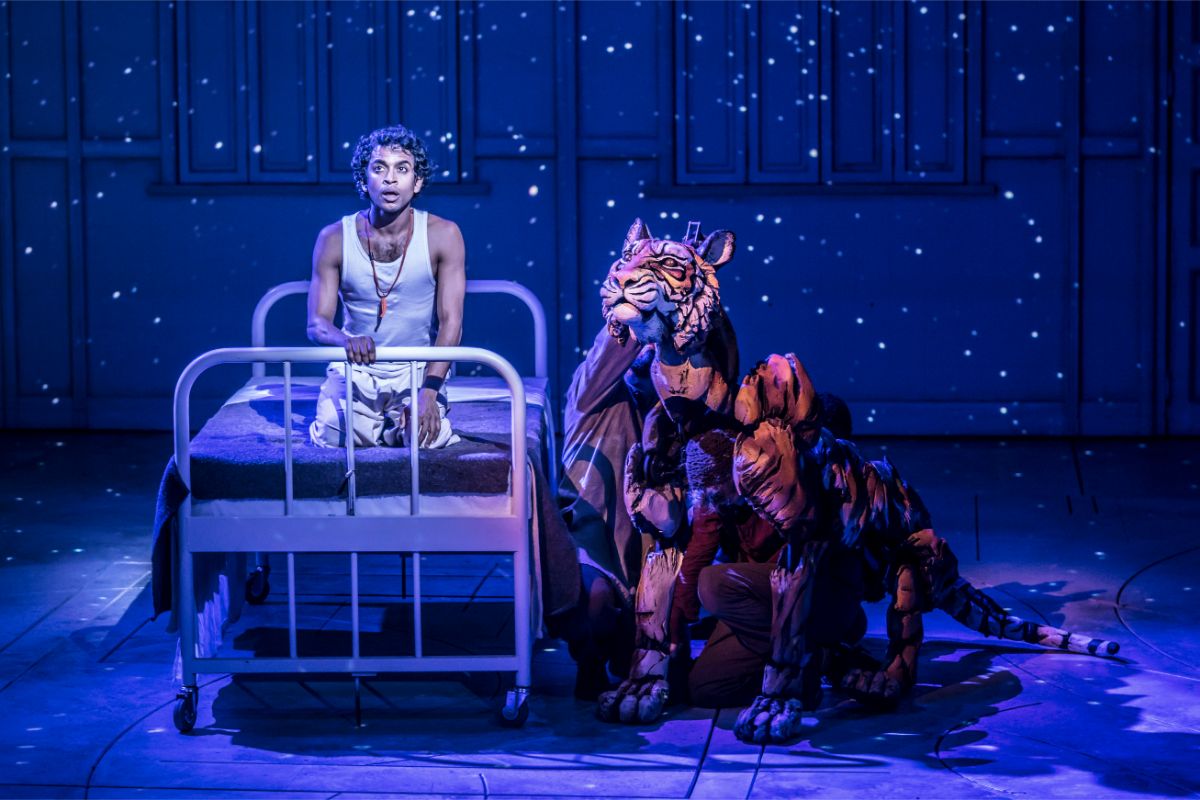 Lyn's Lowdown on... taking your children to the theatre

Review: Life of Pi at Wyndham's Theatre, by Tom Wicker

Stage Savvy #16: Shows to fall for this Valentine's

Best of the West End

Next
Open in app