Here's everything you need to know about the UK’s most produced female playwright and the author of the world’s longest continuously running play.

Witness for the Prosecution

Come on, you must be kidding me. I know she’s the Queen of Crime and I know she wrote The Mousetrap, the longest running West End show ever, but surely famous playwrights like Caryl Churchill have way more productions. I mean Caryl Churchill is alive and still premiering new plays; Christie has been dead for 26 years.

No, it’s true. For most of the second half of the last century she has been the only women with a play on in the West End. She remains the only woman ever to have three plays on simultaneously in the West End. Currently she has two: The Mousetrap at the St Martins Theatre and Witness for the Prosecution at County Hall.

Why’s it called the Mousetrap? Is it about murderous rodents?

No, it takes it name from Shakespeare’s Hamlet in which there is a play within a play which is a metaphorical mousetrap to catch a murderer. Originally Christie’s play—which began life on radio-- was called Three Blind Mice but apparently there was another play with that title. The original production starred Richard Attenborough and Sheila Sim.

If it’s been running—with a hiatus for the pandemic—since 1952 it must be a whopping success.

It is, but Christie had no faith in it. She gloomily predicted it would only last six months. She was wrong, very wrong.

From 18 Sep 2018 when the cast celebrated The Mousetrap passing yet another incredible milestone.

Is there no stopping it?

Original producer Peter Saunders declared that only war, pestilence, or the end of the world would close the Mousetrap. He was right, very right about the second of those things. But it bounced right back and was the first West End show to re-open after the pandemic. It’s like those cockroaches that will survive nuclear winter.

You could see it as a compliment. Most West End shows are here today, gone tomorrow. This isn’t just a play; it’s an institution. Like the Tower of London and Buckingham Palace. A film producer bought the movie rights in 1956 but with the proviso that a film could only be made six months after a run ended.

I love those cosy country house murders that are back in vogue in novel form, so will the Mousetrap suit?

Very definitely, it’s the great grandmother of the genre.

And spoil the fun? Not bloody likely. Long before Harry Potter, Mousetrap audiences have been keeping the secret. Although it is said that if you don’t tip them properly, narked cab drivers have been known to give you the name of the murderer as they give you your change. The moral of that is be a decent tipper.

No problem, head over to County Hall where Christie’s Witness for the Prosecution has proved a big hit in the old debating chamber. It’s not cosy at all. 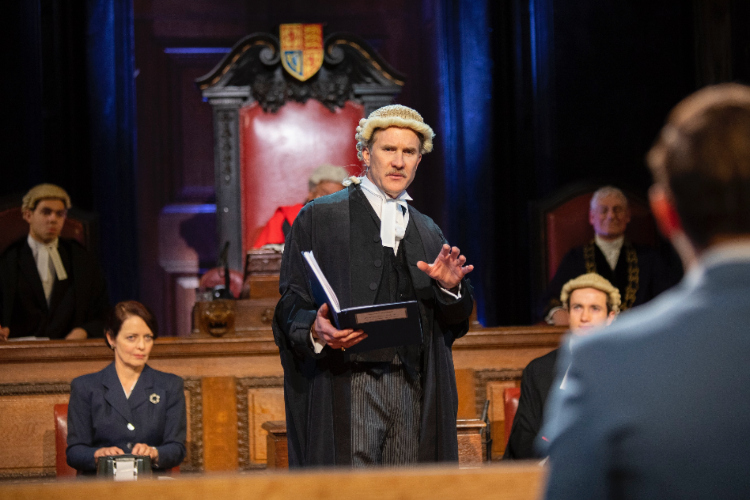 Production image from Witness for the Prosecution. Photo by Ellie Kurttz.

Is this adversarial theatre?

Indeed. Where once it was politicians from all sides of the political divide faced each other across the imposing chamber, in Witness it is QCs Sir Wilfred Robarts and Mr Myers who battle against each other to prove the innocence or guilt or Leonard Vole, a young man living in post-war London who is accused of murdering the lonely rich woman who he befriended.

Ok, that sounds quite dramatic but surely something written in 1953 has little to tell us now?

In fact it is unexpectedly resonant in its depiction of justice, and how justice is twisted by prejudice, class and their attitudes towards women. Christie remains surprisingly astute on sex, violence and the psychology that drives us all.

I bet I’ll guess the guilty one.

Don’t bet too much on it. As Witness director Lucy Bailey says, Christie “can still hoodwink and outwit us, and she was way ahead of her time.”

You can find tickets for The Mousetrap at St Martins Theatre here. Tickets for Witness for the Prosecution at London County Hall till 25 Sep 2022 can be found here.

Cover image of the current cast of Mousetrap. Photo by Matt Crockett.

Enjoyed this article?
Follow Lyn Gardner’s weekly picks on the app.
Follow on Stagedoor
Content exclusively available on the Stagedoor app.
Search for the app on the App Store or the Google Play Store.